Weaving Drafts at the Edge of the Abyss

The following are some accounts of an ongoing project concerned with weaving in a very broad sense.

Small experiments with and explorations into weaving and digital technology along side a series of vague questions about Time, Nature, Consciousness, Reality and Pattern-Making/Reading.

A search for tactics and navigational tools along an evolving path into various weird topics and places. 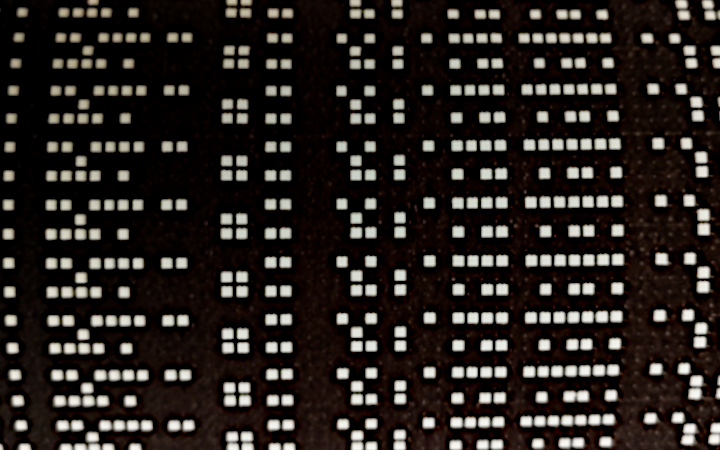 At this stage the project focuses on what is often referred to as weaving ‘drafts’, ‘notation’ or ‘constructs’. A set of graphical instructions and visualizations for how to set up and operate a weaving loom to achieve a suggested pattern and structure. The drafts contain information about a weaving process as well as an abstract idea of what might come out of it. They are some times likened to computer code, a visual markup language or music notation, balancing between a strict procedure and an imaginative sketch map with plenty of room for improvisation, intuition, error and external particularities and influences of all kinds.

The drafts say little about the materiality of the final weave, it’s size, structure, shape, texture or colour. But they have, as I see it, a distinct and peculiar liveliness and tension within them. A hesitation and anticipation. And perhaps more importantly the drafts carry the history, traditions, identities and memories contained within the patterns they represent as well as reflecting the binary and digital nature of weaving in their fields, grids and matrices.

The experiments presented here stretches from digital weaving drafts, real-time prints on paper and interactive installations where one can generate patterns and drafts together with emergent computational systems. Even though all of the experiments can (hopefully) be able to create weavable drafts, they are often set out on their own weird missions and sideways explorations. They become abstract ways of thinking about different themes and ideas, and in that not always fully “functional” as weaving notation. At any point, weather they are created through continuously updating cellular automata or navigated by interactants through computer vision, they can be frozen into something weavable.

The code behind is written in c++/openFrameworks.
Addons used are:

Further long-spun and verbose discussions can be found here: Weaving Drafts at the Edge of the Abyss

The drafts are modelled after a four-shaft loom, where the top left part or the 'threading' represents the warp going through the different harnesses. The top right, the 'tie-up', shows how the shafts are connected to the treadles (mechanisms controlling which shafts and warp threads that are lifted. The operation of these mechanisms is shown in the 'treadling' to the bottom left. The large field in the bottom right, the 'drawdown' visualizes the full pattern and structure of the proposed weave.

Over time, a weave is built up from several picks or passing of weft over and under the warp threads, beaten into a single piece of fabric. Likewise, the drawdown of a draft creates patterns trough the accumulations and integration of rows of one-dimensional arrays. 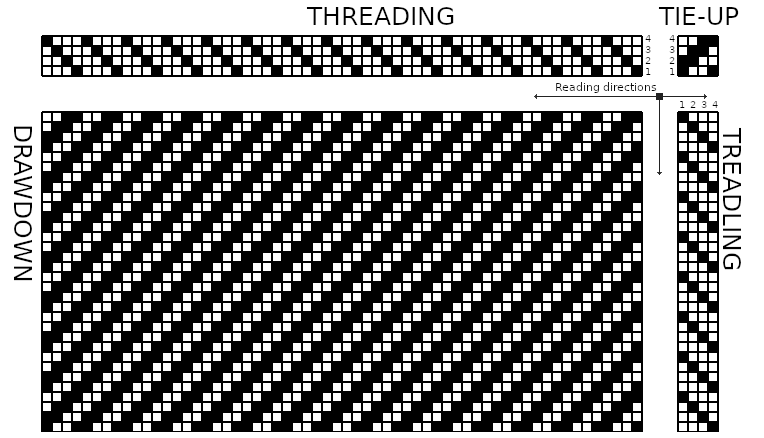 The code was initated structured by emulating a weaving loom. Experiments into generating raw binary data as well as visualized patterns and fully functional drafts started out with recreating simple 'plain'/' tabby' and 'twill' weaves. Using mathematical functions, noise, pseudo-randomness and the like, different ways of generating patterns were explored.

This was followed by adding movement in time. A constant flow of new rows and new picks or streams of patterns.

As a way of arresting the continous flow of the previous experiments, a thermal printer was used to create physical artifacts of the patterns drawn. Long winding scrolls with irregular markings burnt into the paper.

The drawdown is no longer just a flood of one dimensional arrays of black and white squares that quickly flickers by and passes beyond the edge of a screen. They become something tangible and maybe even consistent. Lingering and lagging trails of memories. Freeze-dried moments of the previously rapid succession of pixelated rows.

As a simple way to explore some notions of emergence, tests where made using Elementary Cellular Automata to configure the threading. These drafts are obviously not weavable as is but added some interesting aspects to the whole project. They can be paused or frozen into specific setup and in that be used to generate functional patterns.

Each shaft contains a separate CA system resulting in some possibly weird and surprising setups and patterns.

Drifting Drafts was the resulting of the course Creative Coding within the MA Computational Art program at Goldsmiths University, spring 2020. It is a proposed interactive installation where the previous experiments were extended with computer vision. By the use of 'optical flow', a way of detecting motion, the participant is able to navigate treadling of the drafts the flow of patterns made.

Side wise motions steers the treadling in the x-axis as well as accelerating the update rate, moving the drawing of the patterns forward.

Upwards motion in the y-axis, as in raising ones armes, enables and shuffles the cellular automata as well as giving them random rules.

Rendering as either full drafts or only as the patterns generated